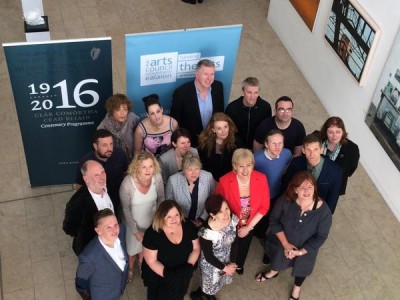 It’s the start of a big adventure. Today, at the RHA in Dublin, Minister for Arts, Heritage and the Gaeltacht, Heather Humphreys announced that The Casement Project is one the successful nine proposals in the Arts Council’s 2016 Open Call for National Projects. Some of you will have heard me talk about the role of the artist as citizen (alongside doctor citizens, hurler citizens, parent citizens, scientist citizens, drag queen citizens, etc.), so I’m delighted that The Casement Project will be one of the major art events of the 2016 Centenary Year and be part of a process of national and international reflection on our past, our present and our future. You can read about the other amazing projects on the Arts Council’s website, but I’m particularly pleased that there’s another dance project involving Coiscéim and Anú Productions, as well as a work on women and the nation by Jesse Jones and Sarah Browne

It’s a huge honour and a huge opportunity to be one of these successful projects and the proposal would not have been successful without the support of many people: the dance artists, the creative team, the producers, presenters, venues, experts from beyond the arts and a myriad of others. (It’s a big project.) I’ve known that the proposal was successful for just over a week, but had to keep it under wraps until the official announcement. That was very difficult, since I wanted to get started on the work straight away, but also because I wanted to celebrate with everyone: it’s going to be a big team effort to make The Casement Project the success we want it to be.

The Casement Project is ambitious – ambitious for me, for dance, but also for how people could understand their individual and collective potential. What would be the point in proposing it, if it weren’t ambitious? It’s also achievable, since it’s built on a creative team and network of partners that I’ve worked with in the past. But for the first time it’s gathering all of them to focus their skill and talents on this one big idea.

The project has five interconnected elements that people will be able to see and join in during 2016: a stage performance presented in Dublin, London, Belfast and Kerry; a celebratory festival of dance on an Irish beach; a dance-film for television and online streaming; an academic symposium in Dublin and in London; and a series of creative engagement opportunities to get all kinds of people involved in the making of the work.

The Casement Project is inspired by the queer body of Roger Casement, British peer, Irish rebel and international humanitarian, whose experience reminds us that Ireland’s flourishing has always been linked to the flourishing of disadvantaged people around the world. Casement’s body offers the model for a national body whose identity is dynamic and open to otherness. We want The Casement Project to be a moment when we explore the potential of a new national body, the kind that Casement might have wished for when he came ashore on Banna Strand at Easter in 1916. And we want to celebrate what the diverse bodies of the people of Ireland are capable of one hundred years on.

Now that the announcement is public, we have lots of work to do: I’ll be starting in the studio with some of the performers for two weeks of research at The Place, London as part of Choreodrome 2015. There will also be a lot of planning and logistics. We’ll be letting you know the details on our dedicated website which goes live soon
thecasementproject.ie

Let us know what you think.