The skeleton of Dublin – Filming Allagóirí Chumhachta (and The Casement Project)

The quarry where we’re filming has provided, in the words of one of the four brothers whose family has run it for generations, the skeleton of Dublin. Granite from this quarry near Blessington has been used in state buildings and statues throughout the city. Its the connection to statues that has brought me there, invited by artists Megs Morley and Tom Flanagan to perform in a short film they’re making for TG4’s Splanc commissions. Called Allagóirí Chumhachta (Allegories of Power), it will explore the significance of stone statues found throughout Ireland and their relationship to political history and collective memory. 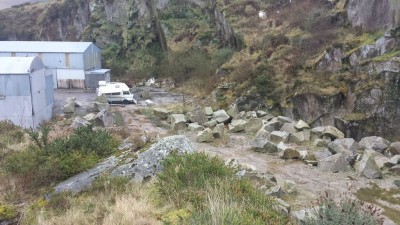 Ostensibly, I’m on a break from The Casement Project. Though I researched The Casement Project through my own dancing (on my own and with Aoife McAtamney, thanks to an Arts Council Bursary), I’m not expecting to dance in the work as it develops. However, as I encourage other people to experience and extend the potential of their bodies, it would be ironic if I lost touch with my own body, so I’ve been saying yes to opportunities that come up for me to dance and to perform. I don’t want to lose touch with the challenge and with the pleasure of those connections that happen in the special circumstances of performing. For that reason, I was quick to accept the invitation from Megs and Tom to be in their film.

And of course, it’s not really a break from The Casement Project: the focus on commemoration in Allagóirí Chumhachta and the place of the body in it is absolutely my concern, particularly as we prepare for the Bodies Politic Symposium at Maynooth this month. Tom and Megs are linking stone as a raw material, the carving process, the commemorative statues around Ireland and, in me, the living body. I feel I’m processing a legacy of statuary – male and female, heroic and abject, triumphant and serene – a seeing what those figurative images become when re-experienced in a contemporary body.

Because it’s about the materiality of stone and the materiality of flesh, I’m naked when we shoot. The rain and cold make me aware of my limits, what I can tolerate only to a certain point in conditions that statues are made to endure. I’ve been frozen, my teeth chattering, my consciousness contracting in a knot of neck and upper-back tension that the cold provokes. Fortunately there’s a camper-van in I can get warm again, release the tension, relax and open my narrowed, hunched physicality beyond its primary survival state.


And, I must stress, I don’t hate this experience. It’s not something I’m forced to do but something I choose. Like so often when I’ve worked in challenging environments, I feel a particular aliveness, a sensitivity heightened by my exposed body, by open skies and by the demanding textures of the varied surfaces on which I’m moving.


I’ve agreed to this shoot because I want to stay alive to my own dancing body and that energises me to encourage others to find their own dancing this year of The Casement Project. I’m happy to create more hospitable environments for others in the first steps of that dance but don’t mind celebrating the resilience of bodies in challenging circumstances too.