After Butterflies and Bones in Belfast 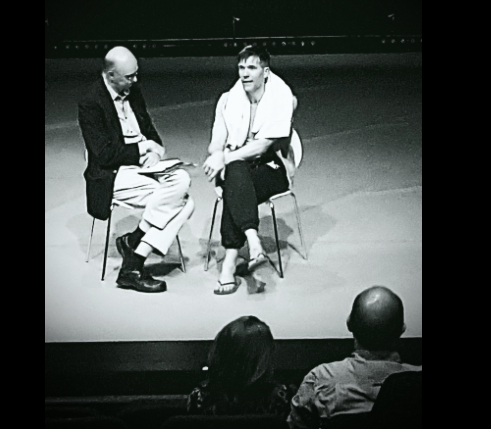 In the discussion after our performance of Butterflies and Bones in Belfast, one of the audience members spoke about the different ‘climates’ she’d observed throughout the piece and the transformations of bodies that she recognised. Describing herself as a foreigner and therefore unfamiliar with the Casement history, she wanted to know what the different climates represented.   I responded that I didn’t ask the dancers to represent ideas or people. Instead I asked them to work at being present with the potential of transformation. I was looking, not for presence as a fixed essential being, but presence as an openness to what might be possible, a risk of being surprised, a presence that seems paradoxically to require of the performers a being centred so as to invite a creative decentredness that takes them beyond ‘themselves’.

Another audience member was moved by what she called the ‘gift’ of the dancers’ presence in the work. I had noticed her as we danced and it was clear that she was generously engaged with the performance throughout. So I think, the presence she felt was also a relation between us, audience and performers, that she enabled and welcomed.  And the choreography invites those relations between all involved in it and is at its strongest when those relations are palpable, as they were in Belfast.

The more I think about why I make work in the way I do, the more I realise that I am not really choreographing to place myself in a dance tradition. I am part of a particular dance training and aesthetic lineage that I value, but I’m not sure that I am engaged in a conversation with other experts about the development of that lineage. Instead, I’m trying to think through why dance matters in the world, maybe especially (though not exclusively) in the limited part of the world in which I grew up. So my work might be a call to people who are interested in what dancing and its work with and through bodies, can change, for them and for others. That doesn’t mean that I don’t appreciate and applaud the refined expertise that’s developed in studios and shown on stages. But I am motivated by what that advanced R&D signifies/enables/predicts beyond its specialist confines.

With this in mind, I hope audiences recognise the performers on stage as fellow humans exploring their capacities and frailties in ways that remind us of what strange potential is available to all of us. I don’t want audiences to consider the performers as an alien species whose beautiful forms might be delightful but which have no relation to our common capacities.   And yet, I realise the work is complicated (like life) and occasionally (like life) uncomfortable. It’s also uncomfortable for me to acknowledge that I may not be contributing to the development of this art form that has transformed my life, nor am I providing many people with entertainment.   But what I’m doing is deliberate, and, for now, it’s what I’m compelled to do, grateful for the support of people and organisations who make it possible.