Bodies Politic was a symposium at Maynooth University that brought together artists and academics to discuss the bodies of individuals and the body of the state in the context of the 1916 commemorations. 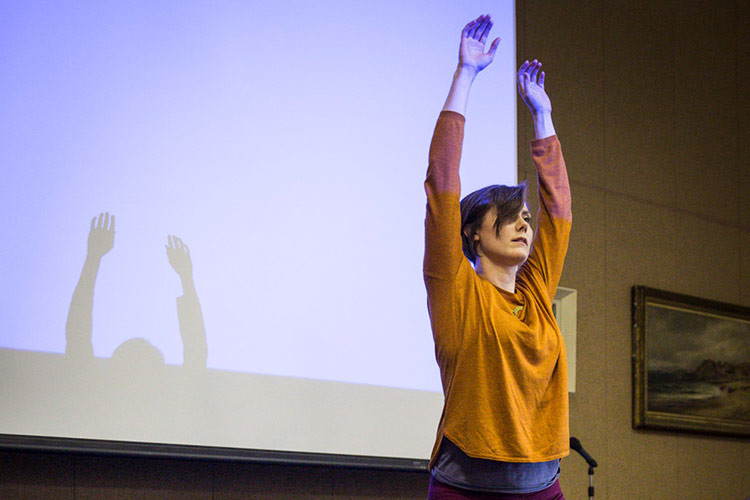 As part of The Casement Project, choreographer and IRC scholar, Fearghus Ó Conchúir invited four of the Open Call National Projects in ART: 2016, the Arts Council’s programme as part of Ireland 2016, and one of the GPO’s Witness History commissions, to introduce their work and to enter into dialogue with academics from a variety of disciplines. The artistic works presented were:

These Rooms by ANU and CoisCéim Dance Theatre, presented by Owen Boss, visual artist and artistic director of ANU with Emma O’Kane, performer in These Rooms. Academic paper by Dr. Karen E. Till, Senior Lecturer in Cultural Geography, Maynooth University.

In the Shadow of the State presented by Sarah Browne & Jesse Jones, visual artists. Academic paper by Dr. Lisa Godson, historian of design and material culture.

Also speaking at the event was Chair of the Arts Council, Sheila Pratschke.

The aim was to provide the public with deeper insights into the practice of some of Ireland’s foremost artists as they engaged with this significant moment of national commemoration and to generate new forms of knowledge through an academic and artistic exchange.

Sir Roger Casement, a fanatical Irish protestant, came to see us, remaining some two days our guest. He was a very handsome man with a thick, dark beard and piercing, restless eyes. His personality impressed me greatly. It was about the time when he was interested in bringing to light certain atrocities, which were taking place in the Belgian Congo. Who could foresee his own terrible fate during the war as he stood in our drawing room passionately denouncing the cruelties he had seen?  Jessie Conrad

A hundred years after the execution of Roger Casement, Hospitable Bodies: The Casement Symposium brought together academics and artists to discuss the body and the nation, particularly in relation to Casement’s legacy and the work of contemporary artists.  Curated by choreographer, Fearghus Ó Conchúir, the symposium programme wove together lectures and discussions with work-in-progress from The Casement Project.